A Thomas Coll of Kilmallock was involved in the Desmond Rebellion in the late 16th century. He was pardoned by Queen Elizabeth. It is not known if he was related to the present Coll clan.

It is widely believed in Coll circles that A. William Coll from Kilmurray, near Feenagh, moved to Dromin Athlacca circa 1730. He was related to the Vaughans of Feenagh.

This was in penal times, around 40 years after the Siege of Limerick and 29 years before Guinness was discovered. His son Patrick married a daughter of John Fox of Clogher named Joan in 1770. Their son Patrick married a daughter of Robert Frazer, Ballynumuddagh, named Sally around 1795. Robert Frazer met a violent death near Sherins Cross in 1798. As a result his only daughter Sally inherited the farm at Ballynumuddagh. Sally and Patrick owned 867 acres of land between Maidstown, Clogher,and Ballynumuddagh in the year 1837.

Their son Owen was born 1797 and died 1866. Owen Married Elizabeth Lynch of Rathcannon around 1848 and they had 5 children, 3 girls and 2 boys.
Namely, Mary who married John Roche. they had 3 children;
Larry , Robert, and Mary.
Robert, 1850-1921, who married Emily Hogan and they had 6 children; 3 boys and 3 girls. (Namely Patrick who married Lil Maher of Charleville.
Robert, who never married and James of Clogher who never married.
Mary-mrs ford-nagle, Mrs Dundon and Mrs O’ Brien.)
Patrick Joseph, 1850-1906, better known as “Black Pat”, married Annie Fitzgerald  of Clogher and they had 6 children, two boys and four girls.
Namely Mary who married Owen and lived in Limerick.
Sally married Jimmy Ambrose and moved to Newcastlewest.
Robert married Nora Howard and moved to Bottomstown.
Owen married Lizzie Raleigh and moved to Bruree.
Katie  married Tommy Dwane and moved to Clogher.
Lizzie married Joe Raleigh, a brother to Owens wife.
Another sister became Mrs Gubbins and had one son, a father Gubbins S.J.
Another sister became Mrs Hartigan she had 2 siblings, Con and a brother.
Con had 2 daughters, Eileen, and Katie, who never married.

Owen D Coll, V.S.,M.R.C.V.S., initiator of the movement to found Limerick Annual Horse Show in 1890, was a member of a well known County Limerick family and farmed at Knockmore, Bruree. He was born in
Kilmallock in 1854 and was one of the best known of his profession in Ireland.

He was a veterinary Inspector for Limerick County Council and Limerick Corporation and other public bodies. An expert horseman, he was a member of the Limerick Hunt and a director of the Limerick Race Company and was closely associated with Limerick Horse Show up to the time of his death.

He was highly esteemed as a sportsman, as a practicioner in his profession and for his sound business acumen. He died at his home in Upper Mallow St on the 16th July 1912 and was buried in Dromin cemetery.

Around 1878 PJ married a sister of Dr Cleary, Kilmallock, named Bridget, and they had 7 children, 3 girls and 4 boys.

Bridget, died in 1893 of child birth and as a result some time later PJ married Nora Theresa Cowhey and they had 6 children ,three boys and three girls.

They were Father Joe P (who was ordained in San Antonio about 1931. Died in 1978 and is buried in Holy Cross Cemetery, Sanantonio Texas). Jimmy (better known as “Jamo”, married and farmed in the home place of Knockmore), John (unmarried, R.I.P), “Baby” Helen (who Married Col O’ Reilly and Lived in Limerick). Baba Kathleen “Boyle” (postmistress Bruree until her death), “Bunny” C Brown (shopkeeper in Buttevant, County Cork). 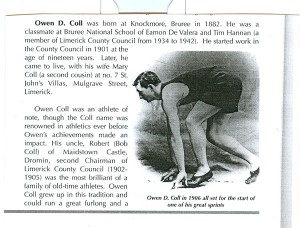